As long as you restrict your reading to the same echo-chamber garbage day after day, you will always be a very small, very sorry person.

I learned this early on when I realized that even though I could spell better than most people, I could also learn algebra. For some reason, most of my classmates either hated English or hated Math, if they didn’t hate every subject. When I was 14, I experimented with poetry and I experimented with deriving a progression for prime numbers that would enable me to quickly calculate square roots. I started getting really irritated by kids who would whine about how a certain subject was “impossible” for them to even make an effort to understand, not based on ability, but on their choice to stay comfortable in their little box.

This absurdist intellectual fantasy blew up when I chose to enroll in engineering college, even though I was a better writer than mathematician. I found myself knee-deep in math, so much so that I once had a vivid nightmare about a ten-page derivation of a single equation for a class in electromagnetic fields. (The assignment was real; that’s why I had a nightmare about it.) I was going to class and trying to pay attention, but then I would go back to my dorm room and read philosophy or stay up all night talking about theoretical physics, instead of doing homework. By the end, I was failing everything except German class.

The year before they actually kicked me out of school, I got a warning from my academic adviser. He asked me why my grades were so bad. I didn’t tell him how I was wasting my time instead of doing homework; I just said that I wasn’t sure why I was there, that I wanted to know why we were working on certain kinds of problems. He stared at me incredulously for a moment, then said, “David, engineers don’t ask ‘why,’ they just do it. Maybe you should go somewhere else and study philosophy.” I was amused and slightly offended, because everyone at engineering school knew that liberal arts majors were idiots.

Since liberal arts majors are generally encouraged to look at contradictory points of view, I was a little more comfortable. For example, I was able to get an A on a paper arguing against affirmative action by using Marxist theory. However, I wasn’t any less arrogant, so I failed freshman English three times (twice for the first semester, once for the second semester).

When it seemed to me like I would never actually graduate from college, I took a job in a machine shop while I finished writing a 2,500-word analysis of literary themes in a contemporary German novel. That job in the machine shop was the first of several low-wage jobs in factories, warehouses, restaurants, and retail stores over the next ten years.

I decided that it was really stupid to not specialize in one thing that I could do well, because then I basically looked like every other unskilled laborer. This was driven home to me when my manager at one company, in an effort to help me get promoted, told me how very important it was to create “distance” between me and the “lower” workers if I wanted to be perceived as worthy. So, just as I had done in a previous job, I did my manager’s work of documenting another employee’s incompetence and then confronting the guy to fire him. I somehow thought that would give me credibility to ask for raises for the other employees, but when I did, the assistant vice president sarcastically explained to me that it was not a good idea, because “they’ll just waste it on food and beer anyway.”

Finally, at around 32 years old, I realized that no one cared about what I could possibly do or why I did anything at all. All they cared about was whether I could actually do something better than someone else. I realized that there was only one thing I did better than most other people, which was reading academic papers. That skill transferred to editing college textbooks, but the textbook publishers wouldn’t hire someone with a German degree: “Uh . . . we need you to edit in English. Sorry!”

So, I went back to school to get a master’s degree in English. However, all the classes looked really boring, so I was going to take a bunch of electives from Journalism, but I had to get their permission. The Journalism Department persuaded me to just major in journalism instead, so that I wouldn’t have to take boring classes. That was fine, until I found out that papers for journalism classes don’t typically use rhetorical analysis or textual analysis, since those are unapproved “liberal arts” approaches to media studies. Also, journalistic assignments don’t encourage questioning a source’s credibility or presenting multiple viewpoints, because that just confuses the reader. There should be only one “government” viewpoint, only one “scientific” viewpoint, and only two “political” viewpoints.

Also, interviewing people who sincerely believe in religion or gun rights scares the crap out of the typical politically liberal journalism student. I had some fun presenting my investigation of right-wing anti-government groups that were active during the George W. Bush administration.

During this time, I was proofreading and editing textbooks for a subcontractor who didn’t care whether I had an English or Journalism degree. I did a lot of technical textbooks, mainly because they often get edited by a copyeditor, that is, someone who actually goes through the entire book, line by line, checking for consistency and accuracy. A few times I was assigned a textbook specifically because I was the only person who knew what a calculus equation was supposed to look like, or who had ever seen the inside of a machine shop.

Textbook proofreading and editing was a good idea until the publishers decided to stop editing textbooks, since “fact-checking” didn’t really matter to most people anyway, and it was cheaper to just send the manuscript from the author over to China to have it printed. That publishing approach didn’t last long, but by the time the textbook market rebounded I had gotten a full-time job in academic publishing.

The main reason I got a full-time, permanent position as a scholarly editor was because of my varied background. Most of the people with adequate academic credentials don’t have practical publishing industry experience, and most of the people with practical publishing experience don’t have adequate academic credentials. Most people who have both are successful as full-time freelance editors, so they don’t want to be constricted by working on-site all the time in an institutional job.

Of course, I made about half the income of most people my age with equivalent education, and I broadened myself so far that I was not even suited for a corporate job in commercial publishing anymore. A few years ago I applied for a copyediting job at a major publisher. After looking at my resume, he said, “I notice you’ve worked on a wide variety of books for different publishers and using different conventions. You know that we only publish one line of books at this location, right? They all have exactly the same style. I’m not sure you would be able to do it the way we need.”

Ah, well. Just leave him to his little box. 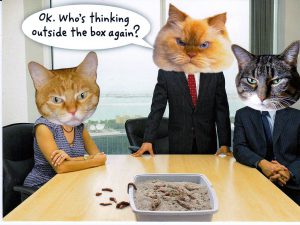